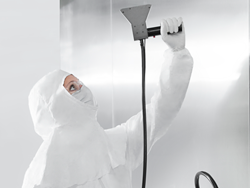 ISO 14644-3 section B12 describes a test methodology for assessing the recovery capability of a cleanroom or controlled environment when challenged with an aerosol particle concentration. Some confusion exists regarding the level of test particle concentrations required. This application note reviews the test method and provides guidance on selecting both the “Challenge” and the “Target Cleanliness Limit”. Attention is given to the requirement that the test concentration should not be so high that “residue contamination” becomes a risk.

Most cleanroom contamination control engineers, microbiologists and pharmaceutical facilities managers are familiar with ISO 14644-1 “Cleanrooms and associated controlled environments”. At the core of the ISO 14644-1 standard is a classification schema (Figure 1) for air cleanliness which sets out maximum particle concentrations at a variety of particle sizes.

These static limits are normally considered within one of three contexts; “as built”, “at rest” and “in operation”. A key characteristic of cleanroom performance is the ability of the installation to dynamically remove particles from the air. ISO 14644-3 Section B12, describes a test whereby the cleanliness recovery performance of the cleanroom can be assessed by the controlled introduction of an aerosol of known concentration with a subsequent measurement of the recovery time.

The purpose of the test is to establish how long it takes for the cleanroom to recover from a challenge concentration to the Target Cleanliness Level. The ISO 14644-3 document recommends that the recovery test is only performed on non-unidirectional airflow systems and should be carried out upon an installation in the as-built or at-rest state. It is not recommended to conduct this test “in production” (for obvious reasons) and further it is not recommended that the test be applied to ISO Class 8 or ISO Class 9 environments due to the excessive challenge concentrations that would be required. The standard also highlights that where an artificial aerosol is used to challenge the cleanroom that residue contamination of the installation should be avoided. This is a critical point, particularly when testing the recovery performance of ISO Class 7 cleanrooms or cleanrooms with a high background particle count or baseline, as the recovery test requires that an aerosol challenge be established in at 100 x the “Target Cleanliness Level”. The data presented in the graph shown in Fig. 2 depicts the Recovery Test being conducted in a ISO Class 7 Cleanroom. As described in the standard, the particle measurements were made inside the time range where the decay of particle concentration is described by an exponential decay, indicated by a straight line on a semi-log chart. Note that the particle concentrations are plotted on the ordinate by a logarithmic scale and the time values on the abscissa by a linear scale.

After the particle counting equipment is set up and running in the cleanroom, the room’s background or “baseline” should be established. In the example above, this ISO Class 7 Cleanroom has a calculated average baseline of 65,000 particles per cubic meter of equal to or greater than 0.5um.

There exists some confusion as to how to select the Target Cleanliness Level. Many testers incorrectly assume this to be the class limit, which in the case of the ISO Class 7 cleanroom the Class Limit would be 352,000 particles per Cubic Meter of 0.5um or greater. This incorrect assumption then leads the tester to calculate a required challenge concentration to be 100 x that value for the aerosol challenge which equates to 35,200,000 particles per cubic meter. This is an excessively high aerosol concentration for a cleanroom and is actually more typical of the air found in office buildings and homes. The intent of the ISO 14644-3 standard is to measure the time for the cleanroom to recover by a factor of 100 while at the same time minimizing the risk of “residue contamination of the installation”. It is completely acceptable and appropriate to select a Target Cleanliness Level as low as possible. Theoretically, one could select the cleanrooms particle baseline as the target Cleanliness Level. However consideration should be given to the possibility that during the test, the presence of test personnel may slightly elevate particle concentrations in the air. Therefore, it is suggested here that the Target Cleanliness Level should be somewhat higher than the particle baseline but no more than 1.5 x the particle baseline. In this way, it is possible to conduct the recovery test while avoiding the risk of compromising the cleanroom with excessively high particle concentrations.

The ISO 14644-3 standard provides two methods for calculating cleanroom recovery performance, The 100:1 recovery time method is simply a direct measurement of the time required for the cleanroom to recover from an aerosol challenge 100 times the Target Cleanliness Level. In the example here the recovery time was 12 minutes. The 100:1 direct recovery test is the simplest method and is generally achievable. It is also identified as the preferred method in the ISO 14644-3 document. In cases where it is not possible to set up an initial concentration of 100 x the Target Cleanliness Level, the standard offers an alternative method, “Evaluation by recovery rate”. This alternative method can be used where a straight line segment can be identified on a semi-log chart and where sufficient (minimum 5) successive measurement pairs can be identified on the straight line segment from which the slope calculations described can be applied. This secondary method is intended as a backup method only and should be avoided if possible.

ISO Class cleanrooms are often subjected to unnecessarily high levels of particle concentrations during the application of the ISO 14644-3 Recovery test and particularly in the case of ISO Class 7 cleanrooms where testers have inappropriately challenged the cleanroom with concentrations even exceeding the limits of ISO Class 9 and typical even of ordinary office or residential space.

In the example presented in this application note, an ISO Class 7 cleanroom is challenged with particle concentrations little higher than the ISO Class 8 Limit thus minimizing the risk of “residue contamination of the installation” in accordance with guidance in the standard.

With careful assessment of a cleanrooms baseline particle levels and an appropriate Target Cleanliness Level, the relatively simple 100:1 Recovery Time method can be applied with minimal impact to the cleanroom.