Beckman Coulter Life Sciences is taking actions in the best interests of our associates, customers, and business partners as we navigate the growing threats of the 2019 Novel Coronavirus disease (COVID-19). Learn more

Automated sample preparation enables highly reproducible quantitative analyses while meeting the increased efficiency needs often required for sample processing in laboratories. This application note describes results obtained using a liquid handling-based automation system for the sample preparation of compounds to be analyzed by LC-MS/MS and applied to the monitoring of multiple classes of pharmaceutical and illicit drugs. This screen panel contains 56 compounds that could be identified and quantified over a wide range of concentrations from 0.5X to 10X the cut-off value. In addition, the large majority of the compounds could be analyzed with accuracy over 80% and CV under 15%. This method provides automated capabilities for analytical laboratories that currently routinely process samples manually for the monitoring of these drugs in biological fluids.

Liquid chromatography-tandem mass spectrometry provides laboratories with a powerful tool for accurate, multiplexed analysis of large panels of compounds. As a consequence, this technology is being increasingly applied to the forensic screening of urine samples, to monitor for the potential diversion of prescription pharmaceutical drugs.

As the number of samples to be analyzed increases, the bench time required to process these samples, as well as the opportunity for errors in processing also increases. Automating the sample preparation prior to analysis by LCMS/ MS can increase the possible throughput, reduce the active bench time required to prepare even small numbers of samples, and minimize the number of human intervention points, thereby minimizing opportunities for error and maintaining the integrity of sample information. Automation can also eliminate the variability that is introduced by multiple technologists processing samples in slightly different fashions.

In this work, we have utilized a Biomek 4000 Workstation (Figure 1) to automate the sample processing for the forensic screening of pharmaceutical drugs in human urine on an SCIEX Triple Quad™ 4500 LC/MS/MS system 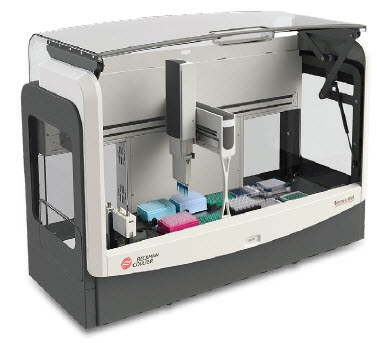 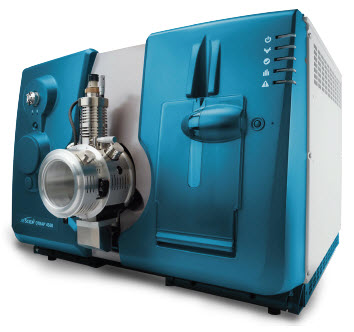 The automated sample preparation protocol is described in Table 1. Briefly, pre-cleared urine controls and samples were combined with acetate buffer and beta-glucuronidase. Following automated mixing, the plate was removed from the deck, capped, and heated to 55°C for 2 hours. Following incubation, curve diluent was added to each well and the plate was centrifuged to clear any precipitate in the samples. 200 μl of the supernatant was transferred to a new plate and analyzed by LC-MS/MS.

This workflow was automated on a Biomek 4000 Workstation that utilizes single and 8-channel pipetting tools. In the software, users highlight the plate wells that contain samples or controls to initiate sample processing. To accelerate the sample preparation, reagents were added to full plate columns using the multichannel tools while partial columns (if any) were transferred using the single channel tool. The volumes of reagents and standards were also set as variables to enable easy alterations during initial optimization studies. The Biomek 4000 deck layouts for pre- and post-incubation steps are illustrated in Figure 2.

Upon completion of the methods text files are generated to ensure data such as sample barcodes are maintained throughout the workflow, and these barcodes can be pasted into an “Analyst batch” for LC-MS/MS analysis. 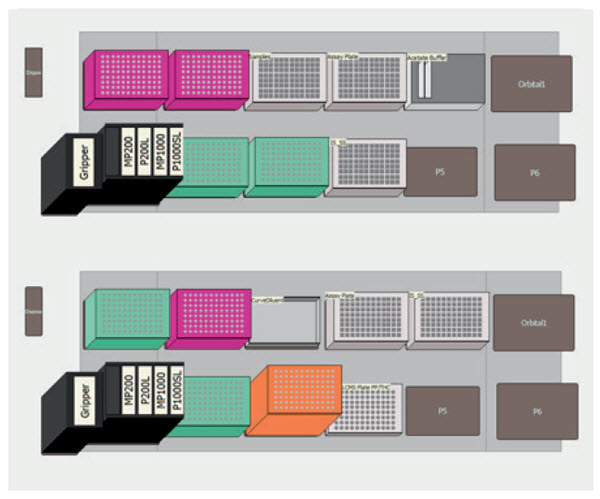 The prepared (hydrolyzed and cleaned) samples were injected onto the system, and the chromatographic separation was achieved using a Phenomenex Kinetex Biphenyl (50x3.0mm, 2.6μm) column, at 40°C. The separation employed a binary gradient of mobile phases A (HPLC-grade water with 0.1% formic acid) and B (methanol with 0.1% formic acid). The LC-MS/MS data acquisition was done using the Analyst 1.6.2 software. Multiquant 3.0.1 software was used for data processing, and reporting. Two MRM transitions were used to monitor each analyte, and a single MRM transition was used to monitor each internal standard. The Scheduled MRM™ algorithm was employed, to maximize the acquisition dwell time for each analyte and thereby improve data quality. 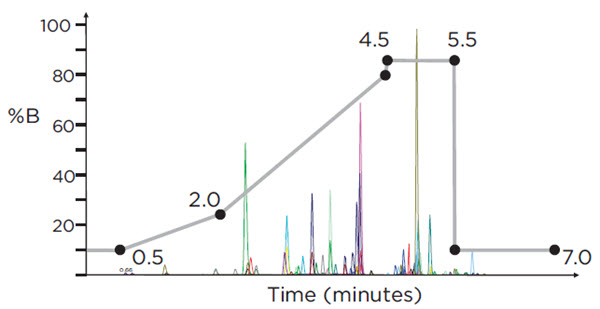 Figure 3. HPLC gradient (% Mobile Phase B) for the analysis of 53 target compounds on the SCIEX Triple Quad™ 4500 LC/MS/MS system, using positive electrospray ionization (ESI), with a run-time of 7 minutes. Overlaid is a representative chromatogram displaying all analytes at their respective cut-off concentration levels. 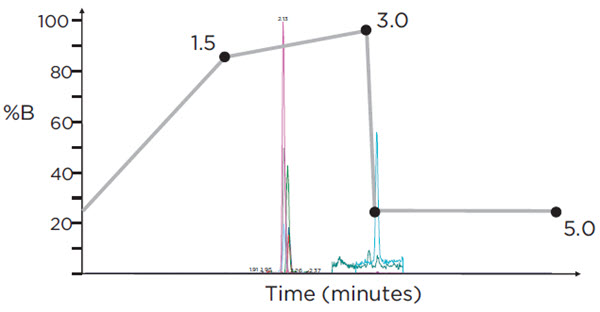 Figure 4. HPLC gradient (% Mobile Phase B) for the analysis of 3 target compounds on the SCIEX Triple Quad™ 4500 LC/MS/MS system, using negative electrospray ionization (ESI), with a run-time of 5 minutes. Overlaid is a representative chromatogram displaying all analytes at their respective cut-off concentration levels.

A full plate of 96 samples and controls can be processed in just over three hours, including the two hour incubation step and offline centrifugation. The reproducibility of the automated sample preparation protocol was assessed by preparing and analyzing replicates (n=6) of each calibration standard for the 56 target analytes. A total of 6 concentration levels were prepared and analyzed, across a concentration range from 0.5x – 10x the cut-off levels. The method displayed good sensitivity, accuracy, precision, and linearity for all analytes. Representative calibration curves are shown in Figure 5 for (a) Hydrocodone, (b) Butalbital, (c) Methadone, and (d) Amphetamine. Representative chromatograms at the cut-off level are displayed in Figure 6, for each of these four analytes, demonstrating the excellent sensitivity of this method. Table 3 shows the average accuracy and coefficient of variation (CV) across the six detection levels for the 56 analytes. The average accuracies ranged from 89% to 109%. The average CVs were below 18% for all analytes, with 49 out of 56 analytes having average CVs below 10%. The average accuracy at each calibration level across all 56 analytes ranged from 92% to 102%, as shown in Table 2, with CVs below 11% at the lowest calibrator level (0.5X cut-off). From the 336 data points that were analyzed (56 compounds, at 6 different concentrations), 98% displayed accuracy over 80% and 92% displayed CVs under 15% (data not shown). 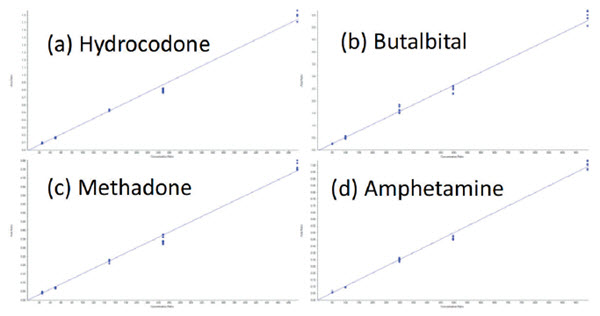 Figure 5. Representative calibration curves plotting Area Ratio (Y-axis) vs. Concentration Ratio (X-axis) for (a) Hydrocodone, (b) Butalbital, (c) Methadone, and (d) Amphetamine. The curves demonstrate the precision and linearity of the analysis. 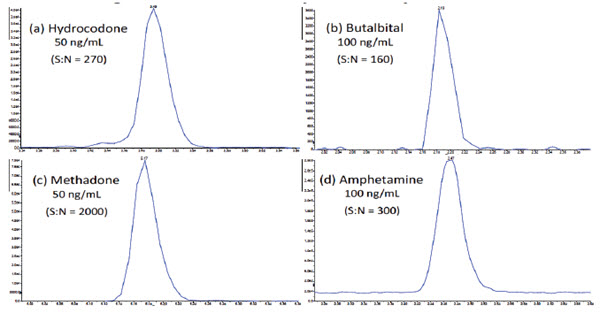 Figure 6. Representative chromatograms at the cut-off level for (a) Hydrocodone, (b) Butalbital, (c) Methadone, and (d) Amphetamine, demonstrating the excellent sensitivity of this analysis.

Table 2. Average CVs and accuracies at each level of the calibration curve, across 56 analytes.

In this study, a successful application of an automated sample preparation protocol for the analyses of 56 drug compounds in urine by LC-MS/MS has been presented. The Beckman Coulter Biomek 4000 Workstation was used to prepare the calibration curves and urine samples for analysis. The SCIEX Triple Quad™ 4500 LC/MS/MS system was used for the identification and quantification of analytes in the samples. Overall, this automated method offers a simple, rapid, accurate and reproducible solution for the quantitative analysis of pharmaceutical and illicit drug compounds that are still routinely processed manually in analytical laboratories.

Table 3. Average accuracy and CV values for each of the 56 analytes across all points on the calibration curve (0.5X-10X the cut-off level).